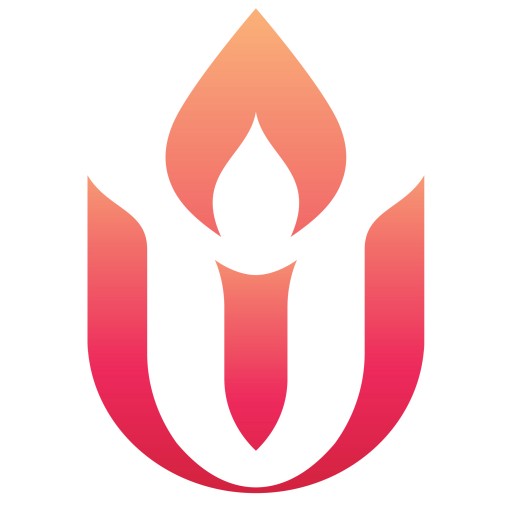 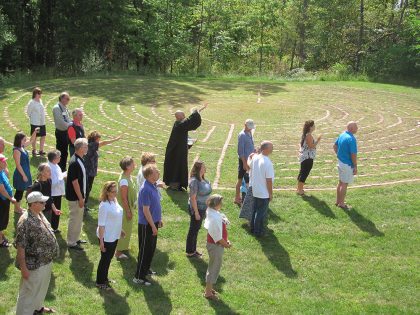 The UUCRT Labyrinth is an 11 circuit labyrinth replica of the labyrinth at the Chartes Catheral near Paris, France.

The UUCRT Labyrinth has an outside diameter of 60 feet and a center diameter of 16 feet. The paths are 20 inches wide and the brick “walls” are 4 inches wide. The calculated path length from the entrance to the center is 1,313 feet or about one-quarter of a mile. 1,616 bricks were used to construct the walls.

There are four quadrants in the labyrinth, and the quadrant walls are approximately on a north-south and east-west orientation.

The designer and chief builder of the labyrinth was Jay Beaumont. Numerous members of the UUCRT Congregation and the Birch School students and teachers helped with the layout and construction. Special thanks go out to John and Jan Kinney for their construction and financial support; and to Athena Drews and Keith Seibert for their advice and guidance during the design phase.

The labyrinth was built in June 2015.

What is a Labyrinth?

A labyrinth is a single path or unicursal tool for personal, psychological and spiritual transformation. Labyrinths are thought to enhance right brain activity. The labyrinth is an ancient pattern found in many cultures around the world. Labyrinth designs were found on pottery, tablets and tiles that date as far back as 5000 years. Many patterns are based on spirals and circles mirrored in nature. In Native American tradition, the labyrinth is identical to the Medicine Wheel and Man in the Maze. The Celts described the labyrinth as the Never Ending Circle. It is also known as the Ka bala in mystical Judaism. One feature labyrinths have in common is that they have one path that winds in a circuitous way to the center.

he Classical Seven Circuit Labyrinth in this example shows that you enter a labyrinth through the mouth and then walk on the paths or circuits. The walls keep you on the path. The goal is in the center of the labyrinth. When you reach it, you have gone half the distance – you now need to turn around and walk back out.

How are they used?

People walk the labyrinth for many reasons. Some do it to relax, some as a walking meditation, some just for fun.

Aren’t they strictly some sort of New Age phenomenon?

No. Labyrinths are ancient. The labyrinth was a central feature in many of the European Roman Catholic churches in the middle ages and many of these still exist today. The most famous of these remaining labyrinths is at Chartres Cathedral near Paris, France. The labyrinth at Chartres was built around 1200. It was walked as a pilgrimage and/or for repentance. As a pilgrimage, it was a journey to become closer to God. When used for repentance, the pilgrims would walk on their knees. Sometimes this eleven-circuit labyrinth would serve as a substitute for an actual pilgrimage to Jerusalem. The cross is at the center of the pattern of the labyrinth and is used in the construction as a guide. Even today, churches with labyrinths encourage people to walk the labyrinth during Lent and Advent.

Where did they come from originally?

Labyrinths have been found all over the world dating from the earliest antiquity. Their origins are lost in the mists of time.

How many labyrinths are there in the United States (or Canada, or New York, or wherever you live)?

We can’t tell you for certain, but a good way to find out is to check out the www.labyrinthlocator.com and search for the area for which you want statistics. The Locator will give you the number of labyrinths that have been entered into the site. There will be many more labyrinths than have been entered, but the Locator will give you a base number to start from. You will know there are at least as many as that number.

“Bringers of Drugs, Crime, Rapists, and some Good People”.

Some observations about Mexicans in the U.S.