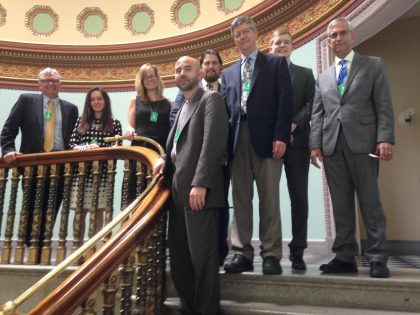 The White House staff requested the meeting “off the record” which means I cannot disclose the content of what they said. The focus of the meeting was on the administration’s use of armed drones to kill people outside of areas of active hostilities (Iraq, Afghanistan, Syria). Steve Pomper and Josh Geltzer did most of the talking. My questions focused on the administration’s definition of “imminence” and I pressed the staff to explain why we are killing people who do not seem to meet the President’s own criteria of “continuing, imminent threat to U.S. persons.” I asked them why a tactic (drone strikes) that by the military’s own analysis in Operation Haymaker (operation in Afghanistan from January 2012- February 2013 that killed over 230 people mostly with drone strikes and 90% of them were not the intended targets) is being used in countries like Yemen and Pakistan where we do not have the intelligence or infrastructure that we have after 15 years in Afghanistan. Another member of our delegation pressed the staff about the administration’s “preventive” war and made the distinction between preemptive strikes and preventative strikes, the former being moral due to the imminent nature of the threat, the later being aggressive and immoral. A third member asked for a timeline of when the drone program will be moved from the CIA to the DOD for greater oversight and accountability.

I can say while I was glad to be representing the UUA at this landmark encounter, the outcome was frustrating and disappointing. However, the primary achievement was building a relationship, starting a conversation, and letting the Executive Branch know the faith community cares and is paying attention.