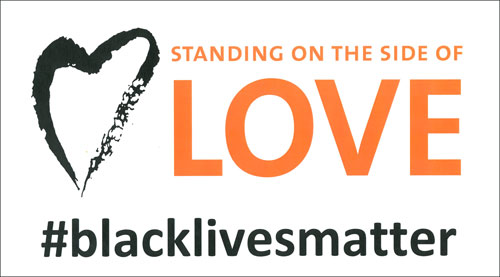 WHEREAS, Unitarian Universalists strive for justice, equity and compassion in human relations;

WHEREAS, Unitarian Universalists have a goal of world community with peace, liberty, and justice for all;

WHEREAS, allowing injustice to go unchallenged violates our principles;

WHEREAS, the Black Lives Matter movement has gained powerful traction in conjunction with recent tragic events involving, in particular, police brutality and institutionalized racism that target the black community;

WHEREAS, the school-to-prison pipeline is an urgent concern because 40% of students expelled from U.S. public schools are black and one out of three black men is incarcerated during his lifetime; and[1]

WHEREAS, we must continue to support the Black Lives Matter movement and Black-led racial justice organizations;

THEREFORE, BE IT RESOLVED that the 2015 General Assembly of the Unitarian Universalist Association calls member congregations to action, to become closer to a just world community, and to prevent future incidents of this nature;

BE IT FURTHER RESOLVED that the 2015 General Assembly urges member congregations to engage in intentional learning spaces to organize for racial justice with recognition of the interconnected nature of racism coupled with systems of oppression that impact people based on class, gender identity, sexual orientation, ability and language;

BE IT FURTHER RESOLVED that the 2015 General Assembly encourages member congregations and all Unitarian Universalists to work toward police reform and prison abolition (which seeks to replace the current prison system with a system that is more just and equitable); and

BE IT FURTHER RESOLVED that the 2015 General Assembly recognizes that the fight for civil rights and equality is as real today as it was decades ago and urges member congregations to take initiative in collaboration with local and national organizations fighting for racial justice against the harsh racist practices to which many black people are exposed.

No matter who you are, black lives matter, and a system of fair, transformative, and restorative justice that is accountable to communities is something to which each of us has a right. Unitarian Universalists and our greater society have the power to make this happen. Let’s do it!

Mother Earth, Climate Change and our Principle of Respect for the interdependent web of all existence of which we are a part